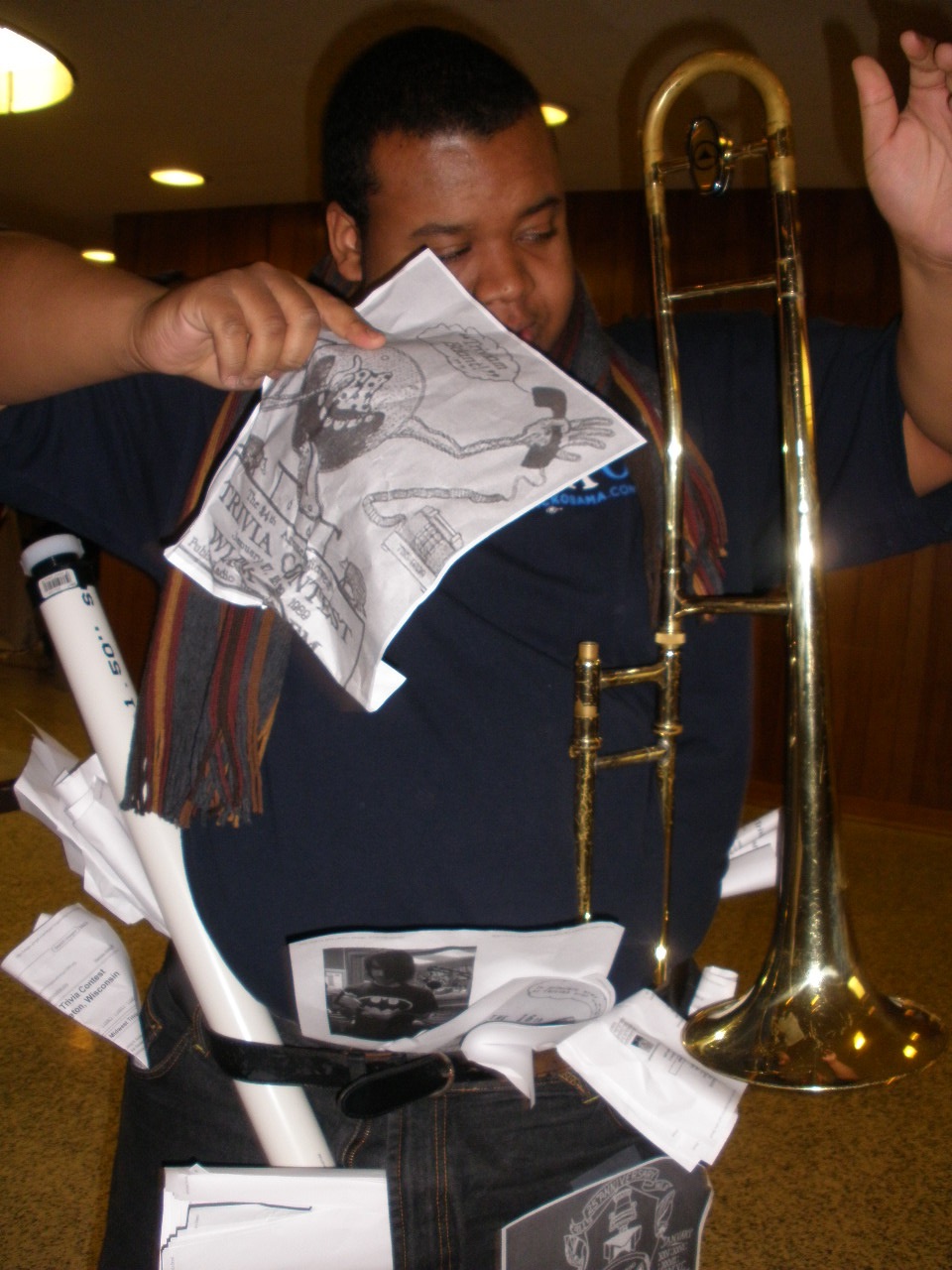 We Rocked the Lull

Our numbers dwindled for a little while, but we still actually did pretty well (if you don’t count the shutouts). Certainly cannot compain.

Being lazy. Doing trivia. Seven of us gathered around, and all more-or-less sober, which is probably the largest sober group we have had all weekend. I think it might be time for an impromptu dance party here, though, at some point.

And what’s up with the current class of Lawrence trivia masters? They don’t know roman numerals or “Dead Puppies”?! WTF?!

We reached the mid-way point — and trivia screeches to a grinding halt. You’re killing any momentum we had, and people are getting bored and distracted. Let’s move on.

I received a phone call from the Trivia Masters a short time ago asking if I knew someone else with a 917 area code because they had been getting abusive calls to the phone answers from someone with a 917 area code. What up New YorK? Who out there is misrepresentin’? C’mon, man!

I Love Single Moms But These Bitches Smell

Nylons?! You Can't Put That In Your Drink!

The quotes keep getting better as the sun get higher. (You have to be here, I guess.)

The Tide Seems to Be Turning for Us

But is it too late to make up the hole we put ourselves into early?

Thank Goodness for the Lack of Phone Answers…

…because our Internet went down, and there are only so many iPhones to go around.

Are we doing this horribly this year or are the questions all really Garruda quality? I mean, seriously, we’re sucking it up, and, frankly, it’s not all that much fun at this point.

We might not be doing well, but we do know one thing: Unicorns kick ass!

First Best Quote of the Weekend

“Dale, you’re about as stealth as that couch!”

Second question and Ben already fulfilled his quota for knowing answers off the top of his head. Crap … so much for Batman Hour.

Through Question number 1 it looks like we’re tied for first … with EVERY OTHER TEAM IN THE CONTEST. Woohoo!!!

Gather Round, One and All

The team is beginning to arrive at Sean’s. Just under forty minutes until the fun begins. We did a little pre-gaming down at Jekyll’s, stopped in at the WLFM studio for T-shirts (might have to go back at some point to do keg stands of rootbeer with the trivia masters), and now we’re setting up shop in the War Room. I snagged the Captain’s chair, and I have all of my effects collected around me. Just got word that Squishy isn’t going to make it this year, but he established his own team, and he’s playing from Point. Zak and Dave will not be making it back from Minneapolis and South Bend, respectively, either, but hopefully they’ll be able to follow along throughout the weekend. Anne Leonard, too.

Holy Crap! The Pants Are Back!

As of this moment, there are just under nine hours until Trivia XLV kicks off. I would say that we’re pretty well set up over in the War Room (aka “hong song-kraam” or “La Habitación de Guerra”), and what isn’t done, well, we’ll just have to wing-it as the weekend goes along.

For those who are interested in joining us, a portion of Los Pantalones are planning on powwowing at Dr. Jekyll’s tonight around 7:00 or 7:30 for some jovial imbibing of brews before trivia begins, and then we’ll start meeting up around 8:30 or 9:00 tonight for the big brouhaha.

Good luck to all of our friends playing on other teams this weekend, and a shout-out goes out to the fellas from Trivia Pirates who joined us for some beers last night in the War Room. Holla!

One week — one week is all we have left until Trivia XLV kicks off — and I’m here to set the record straight about a certain rumor circulating throughout the tabloids, glossies, and blogosphere: Yes, Squishy is preggers.

Oops! What I meant to say is that Too Much Trivia in the Pants is returning for a thirteenth year of wholesome, G-rated, family fun.

(And, no, Squishy isn’t really preggers — or is he…? You'll just have to tune in to find out. Filmateleven.)

No amount of conspiring between Grand Master Drew Baumgartner and National Football League Commissioner Roger Goodell to distract us from trivia by moving the Pro Bowl to trivia weekend could prevent Too Much Trivia in the Pants from returning. If the Packers in the Super Bowl wasn’t enough to keep us from playing our first year, then another pointless Pro Bowl certainly won’t do the trick this year.

Many questions accompany the announcement that we are returning, such as:

Q: Will there be roistering?
A: Perhaps.

Q: Will there be wassailing?
A: Quite possibly.

Q: What do you think of “General” Larry Platt?
A: Hmm, well, we’re still partial to Soundmaster T, but I can assure you that we might be investing in a few belts this year.

See you all next week!